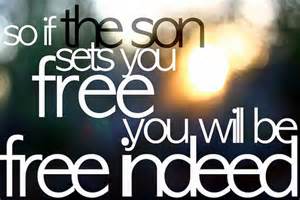 Last week I attended a conference with Graham Cooke. Graham said the key to spiritual learning is the empowerment of the Lord to unlearn. Unlearning previous learning is what helps us to be open to the truth and to grow up in Christ. This statement flows out of Luke 24:45 which says, “And He (Jesus) opened their understanding, that they might comprehend the Scriptures.” The Holy Spirit has been given to us that we might come to know (have our spiritual understanding opened and be able to comprehend) the truth. Why is this so important? Because, if we know the truth, the truth will set us free (John 8:32).

I don’t know if you remember the movie Braveheart. Braveheart was a movie depicting the life of Sir William Wallace. William Wallace was a Scottish knight who was involved (and became a leader) in the Wars of Scottish Independence. The movie and history tells of how Wallace provided both the encouragement and resolve for the Scottish people who were being oppressed by the King of England.

Wallace’s courage caused many Scots to stand up to their persecutors and fight back in the name of righteousness and liberty.

It has been said that William Wallace would have never been described as a saint – but he was without any doubt, a man true to his word, his heart…and his country. He stood on his convictions and was willing to stand and fight for what he believed to be true and right. The people he led had to unlearn the mentality of the oppressed and learn the mindset of being an overcomer.

This is perhaps the most important work that the Holy Spirit desires to be doing in the lives of people today. Sadly, most Christians have never grasped the power of Romans 6:9-11 which says, “For we know that since Christ was raised from the dead, he cannot die again; death no longer has mastery over him. The death he died, he died to sin once for all; but the life he lives, he lives to God. In the same way, count yourselves dead to sin but alive to God in Christ Jesus.”

Our freedom is not based in our behavior, but in our identity. It is not what we do, but who we are that enables us to be overcomers. An example is that I identify as a man who is married. My success in marriage is not based in my behavior, but in identity. By identifying myself as married I see myself as dead to having any type of personal, marital or sexual relationship with anyone other than my wife.

When a man and woman marry they enter into a legal agreement or covenant. It is the covenant (not the vows declaring their future behavior that empower them to live for each other. Yes, in most marriage ceremonies the participants usually declare vows concerning their future behavior before witnesses. But, it is their commitment to covenant, confirmed by a legal document offered by the county or state government (usually called a marriage license) that authorizes, energizes and galvanizes their relationship. At the conclusion of the ceremony the couple is legally married. They are as married as they will ever be whether they stay married for two, ten fifty, sixty, or seventy years and more.

With that said, the act of getting married does not guarantee good behavior (a loving, blessed, and long term relationship). A successful marriage occurs when within the understanding of the participants see marriage as both instantaneous (the ceremony) and ongoing (living out the covenant).

The ministry of the Holy Spirit has presented us to Christ Jesus as His bride, the church. Justification and reconciliation cause us to enter into covenant with the Lord Jesus Christ. And, like a marriage covenant He has become our husband and our head. As the bride of Christ, we the church, must count ourselves dead to all other suitors (the flesh, sin, satan and even death). We must see ourselves dead to our past lives and fully alive unto Christ Jesus in everything we are and do. This type of identification makes room for the Holy Spirit’s ministry to make us alive unto Christ and accomplish God’s will in our lives.

The Holy Spirit’s ministry in us individually and corporately (the church) is to cleanse us by the washing (continually) with water (regeneration) through the Word (what the Spirit hears), and to present us, the church, to Christ Jesus as a radiant bride, without stain or wrinkle or any other blemish, but holy and blameless. The process of His ministry is one of enablement and power. The more we submit to Him, the more He is able to conform us to the likeness of God’s Son. We are then both justified and glorified.

For those God foreknew he also predestined to be conformed to the likeness of his Son, that he might be the firstborn among many brothers. And those he predestined, he also called; those he called, he also justified; those he justified, he also glorified. Romans 8:29-30

Using the example of a husband’s responsibility to love his wife as his own body, Paul says that He who loves his wife loves himself. After all, no one ever hated his own body, but he feeds and cares for it, just as Christ does the church–for we are members of his body. Paul then quotes the Genesis account where God gave woman to man and declared “For this reason a man will leave his father and mother and be united to his wife, and the two will become one flesh” (Genesis 2:24).

Through the ministry of the Holy Spirit we are and are becoming “one flesh” with our Lord and Savior. Given the opportunity, the Holy Spirit continues to reveal our heavenly husband to, in and through us as we grow up into Him. The Holy Spirit’s ministry causes us to radiate the light of the glorious gospel, to reveal the abundant life we have in Christ and to revel in our Savior’s love.

Like a tree planted by the waters, we have been planted and designed for His ministry. He desires to arise from the depth of our being and course through the branches of our lives. According to Psalms 1:3, such a person is like a tree planted by streams of water, which yields its fruit in season and whose leaf does not wither. Whatever that person does will prosper. Such behavior is dependent upon the tree’s identity. Or in other words, what we believe about God and ourselves is what we become.

Blessed is the man who fears the LORD, who finds great delight in his commands. His children will be mighty in the land; the generation of the upright will be blessed. Wealth and riches are in his house, and his righteous-ness endures forever. Even in darkness light dawns for the upright, for the gracious and compassionate and righteous man. Psalm 112:1-4

Have a blessed weekend.